Malice in Memphis: This writers club is killing it 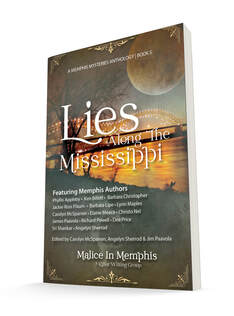 From the country retreat near Piperton that she says she shares with two horses, a “ubiquitous cat“ and “wild animals, of which there are many,” Carolyn McSparren plots murder and mayhem. A revenge killing on the Mississippi River. Sabotage at a Memphis gunpowder factory. Murder by tent spike at a carriage horse competition.
Bloodthirsty? “It’s fun,” said McSparren, whose crime spree is now in its sixth decade.

McSparren — who gives her age as “over 80 — that’s all that you’ll get out of me” — is a co-founder of Malice in Memphis, a self-described “Killer Writing Club” of local authors who largely specialize in murder mysteries, ghost stories and other yarns for those with a yen for the criminal, the disreputable and the supernatural.

The group this month published its fifth anthology, “Lies Along the Mississippi,” a collection of 16 short stories depicting skullduggery on the Big Muddy. States the introduction: “Meet the characters whose lives are defined by secrets, barbecue, blues, ghosts...,” and whose escapades involve “crime and — sometimes — punishment.”

Originally a chapter of Sisters in Crime, a national organization for women mystery writers, Malice in Memphis split off as an independent entity about 10 years ago, and now numbers males as well as females among its roll call of close to 30 writers. Anyone is welcome, as long as they have $24 for the annual membership fee plus an interest in stories about what Shakespeare (in “Hamlet”) and Miss Marple (in a 1964 movie) labeled “murder most foul.”

Not that murderous intent is mandatory: “Yes, we are biased toward Mystery and Suspense, but welcome all genres of writers,” the Malice website states. “If you think about it, you’ll find mystery fuels most plots from children’s books to horror and everything in between.”

They also get tips from crime professionals. “We’ve had state and local police officers and attorneys, talking about the appellate process for a death penalty case,” said Malice president Jackie Ross Flaum, 74, who last year published a novel, “The Yellow Fever Revenge” (“What better time to commit a murder than right in the middle of a pandemic?” she asked).
“We’ve had demonstrations on how to murder someone and how to diagnose a crime scene,” she said. “How to stab someone, how to poison people. We had a martial artist choreograph a knife fight.

“One time when we were out at lunch some of us were talking at great length about the best way to poison somebody, and then I realized people around us were looking at us funny...”
Flaum describes murder as “the ultimate crime, the ultimate sin. It’s the ultimate horrible thing you can do or someone else can do. I think that’s why it fascinates us. What makes people do these things? And can they get away with it?”

‘One place where everybody accepts us’
The members of Malice in Memphis run the gamut in writing experience, just as their storylines are all over the place in fiendish plot twists. Some of the participants are published authors; others are hopeful or hobbyists. According to the Malice website, the group welcomes writers at “all levels of experience.”
“Writing is a solitary endeavor,” said Lynn Maples, 50, a reporter turned healthcare consultant whose contribution to “Lies Along the Mississippi” is “White Lightning,” in which the receding waters of the river reveal a car containing crates of moonshine and a skeleton holding a gun. “Malice allows a writer to connect with someone who has the same passion, curiosity and fears as I have.”

“Writers can be a little peculiar, and this is one place where everybody accepts us,” McSparren said. “And the real fun of it is that we do become better writers.”

A longtime freelance journalist, Flaum said she long had planned to write fiction but never actually did it until she joined and was encouraged by Malice. “Our goal is to make everyone the best writer they can be, and to be published somewhere,” she said. “The positive feedback is essential. If you are a good enough writer, eventually your work will be seen.”
The Malice in Memphis anthologies provide a forum for work to be seen. They also have provided public exposure; earned awards at genre conventions; and generated some income. “They actually sell, on Amazon,” McSparren said.

Published in 2013 by Dark Oak Press, the first anthology, “Bluff City Mysteries,” earned interest because of the “Memphicentric” nature of its murder scenarios. The second anthology, 2016’s “Ghost Stories,” had even wider appeal, because “every Southerner in the world has a ghost story,” McSparren said. “It’s just part of the ethos.”

‘A mystery is like a puzzle’
A newcomer to detective fiction, Maples said he learned through Malice that “a mystery is like a puzzle, and I love puzzles. You just have to know how to place the pieces at the right time in the right location so that gradually an image appears. And if you do it successfully, the reveal is worth it. I think most readers are the same. For most, they want a mystery to unfold and have a twist at the end that leaves them going, ‘Ah-ha!’”

McSparren said it might seem odd that people turn to stories of murder and malice as “escapism” from the hardships of the workaday world; but she said the explanation for this human predilection is as logical as a deduction from Sherlock Holmes or Hercule Poirot.

A successful author with numerous romance, mystery and animal novels to her credit, from publishers large (HarperCollins, Harlequin) and less large (Bell Bridge Books), McSparren said murder mysteries are reassuring even in the midst of a lethal pandemic because “what people want is for the world to be in order. And mysteries are a way to bring the world back into order fictionally, if no other way.”

Explained McSparren: “You have a crime or more than one crime which really sets the world a little bit out of order — if you kill somebody, you can’t go back. And what we who do not commit murder are always looking for is a way to bring the world back. That’s why the most important person in a mystery is the detective, the solver. He goes out into the mist for us and brings the world back to some semblance of rational order.”